If subpar academic performance and a poor reputation aren’t enough to stop declining enrollments at Montessori Peaks Academy, why not turn to fear mongering?

Montessori Peaks Academy (MPA), a Jeffco charter school, is investing in an advertising campaign that is designed to scare families into enrolling their children into their charter school. Facing challenges retaining students through the final years of their program, MPA is attempting a new recruitment strategy, fear. 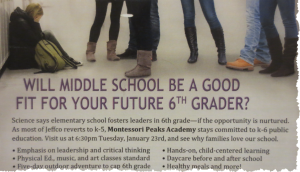 Montessori Peaks Academy uses fear to increase enrollments. Their post card shows a student cowering in fear while the suggestion of intimidating middle school students tower over her with the caption “Will middle school be a good fit for your future 6th grader?”

MPA has designed a web and print campaign that is aimed at stirring up fear regarding Jefferson County (Jeffco) Public Schools’ progressive change that transitions 6th graders into middle school. According to Jeffco, “The opportunity for students to be in a middle school for three years minimizes the drawbacks of the two-year “in/out” transition. Three years in the same school promotes stronger engagement in the academic progress and the social-emotional growth of students by students themselves, their families, and our teachers.” Ironically, while MPA’s marketing campaign criticizes Jeffco’s transition to a 3 year cycle for neighborhood middle schools, they attempt to claim these very same benefits for their own 3 year cycles. 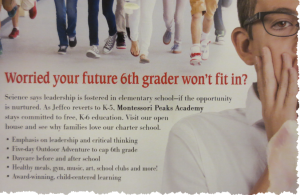 Montessori Peaks Academy publication shows a troubled youth, exasperated, as a group of students run after him with the caption “Worried your future 6th grader won’t fit in?”

MPA’s publications make vague and unsupported appeals, claiming “Science says” leadership is best fostered in 6th grade spent in elementary school as opposed to middle school. In an additional attempt to claim superiority over neighborhood schools, a recent MPA newsletter asks if students in other schools would rather not transition to a middle school, and instead “…spend sixth grade in an environment that nurtures and fosters children…”

The intent to capitalize on fear is a cornerstone of MPA’s recent public relations push. According to Montessori Peaks Academy’s PR Committee, which includes Principal Shannon Aasheim and Board President Shiloh Sword, “The hook is getting families concerned about their 6th graders going to middle school too early, then having the whole family follow.”

Whether Montessori Peaks Academy’s new marketing campaign is spurred by their dropping enrollment rates, or an attempt to move attention away from recent concerns regarding nepotism, investigations regarding student harassment, or a lawsuit in which a Jefferson County judge declared that their Board of Directors conducted illegal closed door meetings, the result is that a public school is attempting to create fear and prey on the concerns of students and families.

To make the nightmare worse, this is a fear campaign funded by tax dollars.